WARNING: This product contains nicotine. Nicotine is an addictive chemical. 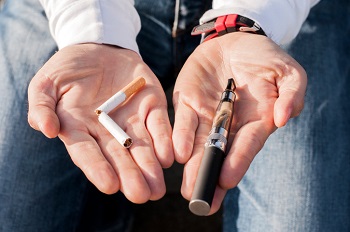 If you’re ready to stop smoking and haven’t yet found a method that sticks, listen up. A recent survey of vapers found the majority started smoking e-cigarettes to help them quit smoking.

Vaping Cited as Main Reason Many Stop Smoking, According to New Study

The results, published in the International Journal of Environmental Research and Public Health, found the main reason many tried vaping was to reduce or stop smoking. Most study participants said they had completely switched from smoking to vaping and while some newer vapers still smoked, they were still cutting down on conventional cigarettes use.

Several surveys of vapers have been conducted internationally to determine the characteristics of vapers, types of e-cigs, the strength of nicotine and flavors people were using and why, how long people vaped over time, if they had previously smoked tobacco, and if they had stopped or not. This particular New Zealand study adds to the growing international evidence suggesting that vaping is less addictive than smoking.

Vaping Marketed as a Way to Stop Smoking

Smoking e-cigarettes are often seen as a less dangerous alternative to tobacco, and vaping devices are sometimes marketed as a way to help smokers kick the habit.

Another study, published by the National Academies of Sciences, Engineering, and Medicine found that e-cigarettes can help adult smokers stop smoking offering adults an opportunity to reduce smoking-related illnesses.

The congressionally mandated study suggested that e-cigarettes are less harmful than conventional ones, but the researchers would not state they are without risks.

“E-cigarettes themselves, and their components, are significantly less toxic than combustible cigarettes,” says David Eaton, the dean and vice provost of the graduate school at the University of Washington, Seattle, and head of the committee in charge of the report.

A new study from Ohio University shows that e-cigarettes may be less harmful than conventional cigarettes.

Ready to Stop Smoking? Talk with a Gorilla Vapes Expert

For those ready to break the habit and stop smoking, you probably have a lot of questions. Visit one of our 13 locations on the East Coast to talk with one of our knowledgeable e-cigarette experts and experience the vaping community first-hand.

At Gorilla Vapes, we stand by our quality. 100% satisfaction, no questions asked.

● Vapor Shops: How to Find One You Can Trust

● Vaping For Beginners: What You Need to Know

● Get a Big Vape Cloud: Setting Airflow for Maximum Clouds